Reasons to Get Into Digital Photography

When I started out in this hobby more than 20 years ago, I used my Dad’s 1960s vintage Pentax Spotmatic SLR camera. You can still find these old all-manual cameras and their like on the second-hand market or on auction sites.

One of their great advantages was that they used the M42 threaded lenses, a huge variety of which were made by many, many manufacturers and, again, second-hand lenses are easy to come by and relatively cheap.

I graduated to using a Pentax P30 SLR which I think offered some automated features (the mists of time have fogged my memory) but this camera used Pentax’s bayonet fitting, so I had to get a set of lenses to use specifically with this camera. Using a T-Adapter, I could use my old M42 lenses but only in manual mode. The P30 still occasionally pops up on auction sites or in the second-hand market. It was a camera I really enjoyed using. If you’re interested, you can see its instruction manual (PDF file) here. In fact, if you’re ever looking for a manual from any of Pentax’s old bayonet models, they’re all listed here.

After that, I was seduced by ‘programmable’ cameras, so I switched to Minolta and bought a Dynax 7000i. You could buy little program cards that slotted into the camera to put it into certain modes such as for taking landscape, sport, portrait photos and so on. A bit of a heavy camera but it gave great results.

Then, one day, I came home to find the house burgled and all, and I do mean all my camera gear (down to the most inconsequential filter) had been stolen, along with my VCR, passport, family heirlooms and all the usual stuff that robbers shove into their swag bags.

Back to square one, photography-wise. This time, I opted for a Nikon F-601 SLR and a few autofocus lenses. Another fine camera that produced excellent results. One thing I found by this stage was that the amount of film I was shooting was beginning to cost a small fortune. Getting great shots isn’t easy – that’s why the pros shoot reams of film to get that perfect shot. So I started looking around for digital solutions.

Flatbed scanners were pretty common but their scanning resolution was pretty low – about 600 dots per inch (dpi). They had another disadvantage – what was scanned was a print; i.e. a second-generation copy of an image that had already been processed and manipulated in some way (i.e. by the machines that produced the print) that I had no control over.

What I needed was a film scanner, something that would scan negatives and slides directly. The cost of having these done by photo labs was (and still is) pretty exorbitant so that solution was out of the question. Buying a film scanner was also an expensive proposition but it would be a cheaper option, in the long run, than having several hundred negatives and slides scanned by a lab. These scanners, at the time, could scan at about 2700 dots per inch, enough to give a decent 8×10 printed photo.

Digital cameras were only beginning to appear at this stage with top-of-the-line models offering 3 MegaPixel sensors. Not enough for decent sized photos. So I figured I’d wait until 6 MegaPixel sensors appeared. That turned out to be a longer wait than I’d anticipated!

So, my entry into the world of digital photography came with the purchase of a film scanner and a copy of Adobe Photoshop. I had dabbled with darkroom work in the late 1980s but, that too, was expensive and very time consuming. Photoshop was a darkroom on my PC that let me try out different techniques without incurring any cost, apart from any time involved. It’s now central to producing final results that I’m happy with.

Around the start of 2004, the first affordable consumer-level digital SLR cameras arrived on the scene, so I picked up a Canon EOS 300D. While the sensor is uses is a 6 MegaPixel one, the physical size of the sensor is smaller than a frame of 35mm film. The sensor is actually APS size. That means that any lenses I buy not specifically made for the camera need to have their focal lengths multiplied by 1.6. So telephoto lenses act like longer lenses with this camera (any digital camera that takes interchangeable lenses and doesn’t have a sensor that’s the same size as a 35mm film frame will have a similar factor to take into account). While that’s good for telephoto lenses, it’s not so good for wide-angle lenses, principally used in landscape photography. Fortunately, the Canon EOS 300D comes with an 18-55mm zoom lens that equates to a 28-80mm zoom lens on a film-based SLR. Quite a number of the photos you’ll see on this site were taken with that EOS 300D. I’ve since upgraded to the Canon Digital Rebel XT (350D) which has a larger 8-Megapixel sensor and a few extra bells and whistles. 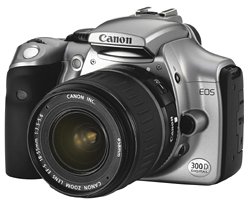 So, now having gotten into digital photography, what have I found? Resolution is important in landscape photography as large prints are frequently made and you need lots of resolution to keep big pictures crisp. The fact is that modern digital cameras are now capable of at least matching the resolution provided by 35mm film. There are other advantages for landscape photographers as well.

When you’re actually out there, shooting your landscapes, there’s very little difference in the techniques involved in capturing your image. Metering and depth of field are the same. Composition requires the same amount of care and deliberation and lighting conditions are also equally important. Whether you use film or digital, you still need to work hard to get as much as possible close to perfect when you make your exposure.

Digital photography isn’t perfect by any means. There’s the issue of noise which increases with higher ISO settings. But this can be compared with the increase in grain seen with higher speed films. So this just may be a case of what you fancy. There may be a problem with banding on smooth areas (such as skies) and poor definition of distant detail.

Chromatic aberration (color fringing around objects) was always there – it’s a function of how lenses transmit light – but the effect is more noticeable now because we can zoom in on images by huge amounts when inspecting them closely.

With digital photography, you could argue that there’s a huge amount of time to be spent at the PC, manipulating the image, tweaking it here and there, cropping it and so on. And that’s only for pre-processed images such as digitally scanned film or JPG files produced by digital cameras. That time spent also applies to any scanned image, not just to those from digital cameras.

Where the extra time for digital photography comes in is where RAW images are concerned. These come straight from the camera without any in-camera processing having been applied to them. Digital images are never at their best straight from the camera. Some post-production work is always necessary to make the image conform to your vision in terms of color and contrast.

As with film, digital photography has advantages and disadvantages but, on balance, I think there are many more significant benefits to going digital than negative ones. Here’s a list of the pros and cons of shooting digitally:

Noise: These are pixels that differ in color and tone to those directly adjacent to them, giving an appearance similar to film grain. The higher the ISO setting on your camera, the more apparent the noise.

Chromatic Aberration: Is caused by optical defects that limit the capabilities of a lens. Different colors of light are not all focused to the same point and this leads to color fringing.

Dynamic Range: The tonal range that a digital camera, scanner or film can capture. The greater the dynamic range, the greater the detail in areas of shadow and highlight.